Trip to Alaska — July-August 2014: Seward, Kenai Fjord, and on to Anchorage 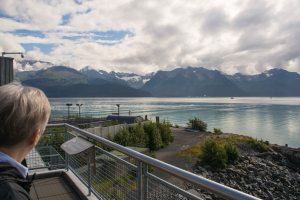 Gwen looking out from the Alaskan Sea Life Center

We ate our last breakfast on board, and went through the exiting procedure. We waited a bit in the Seward arrivals tent, and then Albert showed up. He and his wife Marlene got us loaded into their 12-passenger bus, and we were off under the auspices of Planet Earth Adventures. After stopping at the hotel to get a brief review of our itinerary and meet the others in our small group (a family of five from Switzerland, Oliver and Julie, with youngsters 6, 8 and 10 years old; a family of three, Mitch, Robin and Adam (14 years old); and Joy, whose significant other, Chris, went fishing all day, so we didn’t get to meet him right then). From there, we went into Seward to visit the Alaska Sealife Center, where they rescue sea life that has some kind of problem and if possible resolve the problem and send it back into the wild. This seems to be a theme in Alaska. It had a variety of exhibits, including sea lions, sea otters, fish of various varieties, puffins, all in well-equipped exhibits. 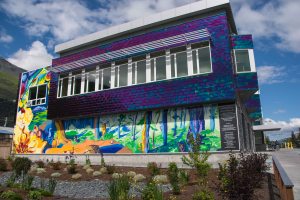 The back wall of the Seward Library and Museum center.

After a couple of hours, we met up outside to regroup, and then went our separate ways to get some lunch and walk about town. Our walk through town included stops in a number of art shops, a bookstore, and the town Library and Museum (both in the same building). The outside of this las building really stands out, as you can see.  In addition to a mural on the back wall, it’s second floor has multicolored iridescent rectangles around the whole of the outside of the building.  Is this supposed to mimic the shimmer of the light on the underside of a salmon?

From there, Albert took us to the Exit Glacier, which was our first hike. It was good fun, (reminded me of walking in the hills around Palm Springs). The glacier is indeed receding, as we were reminded of at every turn. This result of global warming is going to be disastrous for the world as we know it, and thus it is something we should all work to reverse. This glacier didn’t make a sound that we heard. It is considerably smaller than Hubbard Glacier, and that may explain the lack of cracking sounds. One thing we did see were the scrub marks on the rocks that had been under the glacier. The marks showed that the glacier pushed harder rocks along, and used those to scrap long grooves into the stationary rocks.

From there it was back to our hotel, and out to dinner (in the hotel restaurant — Resurrection Roadhouse — which did an excellent job with the Alaskan Salmon). Maybe there is something to the quality of fresh locally-caught fish!

Tomorrow it is out early to take a boat trip in down and around Kenai Fjord, and then a train ride to Anchorage.

One of the hills near our hotel. High enough to reach into the clouds.

Today was a long day. We got up and breakfasted in the same restaurant as we had dinner in. As we were to learn, the cost of living in Alaska is about 1.5 times what it is in the rest of the US, if the cost of food is any indication. The breakfast was good, but nothing special.

Out and into Kenai Fjord

Stellar Sea Lions sunning themselves on the remarkably sunny day.

We then met up with Albert and the rest of the gang, and were shuttled over to the harbor to go on the Kenai Fjord Tour. This is a boat trip out to see the waters, animals, birds and glaciers in and around Kenai Fjord. We started out at high speed in a catamaran (two hulled, but the decks were set across the two so that we didn’t know it wasn’t a single vessel except to look at the bow of the boat before we boarded). Just as the other boats we had been out in this trip, the lower of the two decks was completely enclosed, while the upper deck was enclosed at the front, but open at the back for those of us who wanted to take pictures. 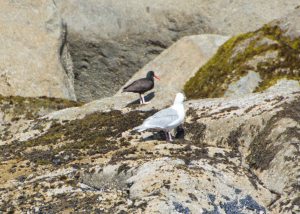 Cormorant puffing its wings to dry them in the sun. 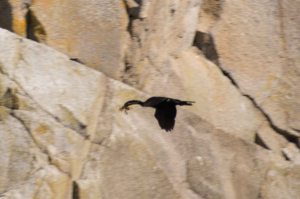 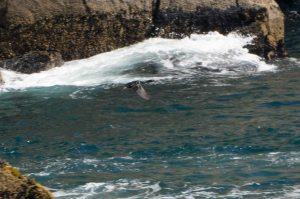 Surprisingly, we didn’t see any ducks

We were looking for harbor seals, or stellar sea lions, and we found them almost right off. They were happily laying in the sun warming themselves or in the shade, enjoying a cooling breeze. It was, after all, a sunny day, and while to us humans this was a good thing, to the sea creatures we were interested in, they rather preferred rain and cold. We also saw lots of birds, which our captain happily told us about. Aside from the sea gulls, there were cormorants, and puffins, more than one variety of each. They were nesting in the rocks that we sailed around, in very large numbers.

Our first whales, Sei whales we were told

Porpoise running along side of ship

Porpoises playing right next to the hull

Of course the attraction of the day was the whales. Were we going to see any? And the Dall’s porpoise — are they going to try to race the boat? Yes, of course they are, but not until we were coming to the glacier on the way back. Whales, though we saw in some numbers. The captain identified the first ones we saw as Sei Whales, and indeed pictures taken by Albert confirmed it.

I should take the time at this point to let you know that Albert is an avid amateur/professional photographer. He has two high-end Nikon cameras, and the long lenses to put on them. He gets some great pictures, but the camera structures he uses are heavy to carry around, and take a weight lifter to hold steady (my humble opinion). He uses them to perfection, though. He has some examples of his work in his van, which he let me take a look at. High quality stuff, mostly animals (which makes sense since he spends so much time leading these expeditions to see animals here). His outfits suit his purpose perfectly, I think.

After flapping several times, the whale dove for the depths

Back to the boat trip. We saw the Sei Whales swimming side by side, and taking in and expelling air. They were near enough to the boat to allow good pictures by all. We didn’t see any Orcas, unfortunately, but on the way back to the harbor, we were treated to a water flapping scene by a happy hump-back whale. He was kind enough to do it a number of times to get our attention, and to allow us to motor back to him and watch for awhile.

A glacier coming into Kenai Fjord 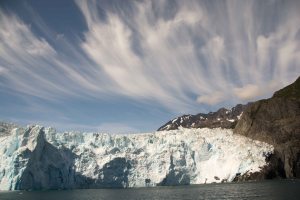 The clouds provided a marvelous counterpoint 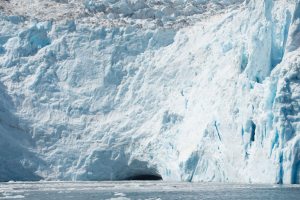 The front wall of this glacier calved as we were watching

It kicks up quite a splash

We did a sail-by of one of the glaciers that feeds into the Kenai Fjord. The captain took us up within a quarter mile of the face, and we were treated to some calving and the thunder and squeaking of the glacier as we watched the ice fall. The trip was a long one (we were on board at 11:30 and back at 5:30). We then were taken to the train station right near by and started our trip to Anchorage. We got an excellent dinner on the train, were seated in the dome car to see the countryside, and treated to a good trip, arriving in Anchorage just before 11:00 pm. Albert and Marlene loaded us into their vans and took us to the hotel for the night.