Another view. Note the glacier on top of the mountains to the left.

Today we decided to take it easy, and just go into town and walk around. Gwen got the laundry done by 11 am, so we headed out. Once we hit the visitor’s center, we began getting hungry. They recommended a local fish and chip shop “in the ANB Hall.” We found it on the map, and walked to it. That was what it was called, the ANB Hall, and there was a sign out front telling us that they were indeed offering fish and chips. So we went inside, into what looked like a large church hall, with a kitchen off one side, and big round tables set up throughout. We ordered our fish and chips (Rockfish and chips with a couple of crab cakes on the side), and about 20 minutes later, they brought it out. It was really good, just as advertised.  While we were not alone in the hall, it did not seem very well known. And “ANB?” It stands for Alaska Native Brotherhood. We were being served by the local Tlingit tribe in their social hall. 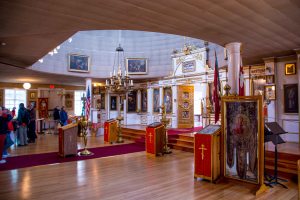 The sanctuary in the Russian Orthodox Church

After lunch, we walked to the Russian Orthodox Church, and the Russian Bishop’s House. The church is an active one, and indeed two priests were there as well as many visitors. The arrangement of the building was different from what I’m used to in a Catholic or Protestant Church, where the church is a hall with rows of pews and the area for the priests up front, and maybe a choir beyond. This arrangement was circular, with rows of chairs as you come in, then a central area without furniture in the center, and then beyond that a wall with doors in it, open to view, where the priests presumably occupy. On either side, there are icons with candle holders where one can invest to light a symbolic flame for a loved one or friend. The icons are (according to the signs) special messengers to God, who may choose to answer a prayer, or to channel support for the petitioner through it. The Russian Bishop’s House which is about a five minute walk from the church is no longer related to it. The house is now owned by the National Park Service, and they preserve it for its historical value. It was built in 1843 for Bishop Innocent (Ivan …..) who was one of the first Russian priests to live in the Alaskan area while it was claimed by Russia. Russia sold Alaska to the US and William H. Seward (U.S. Secretary of State) in 1867. Known thereafter as “Seward’s Folly”, Alaska was purchased for $7.2 million. The Russians had fought the Crimean war against England, France, and the Ottoman empire in the 1850s and needed money to rebuild their weakened military and political institutions.  Russia’s main interest in Alaska had been the fur trade, but it had waned as the sea lions became harder to find, and as competition from American and Canadian interests increased.  After the sale of Alaska to the U.S., the Bishop’s house was retained by the church with various functional uses until about 1970.  By that time it had gotten so expensive to keep up that it was just boarded up and abandoned. In 1972 the Park Service bought it and over succeeding years restored much of it to displayable condition.  One thing I learned was that many of the Tlingit were members of the Russian Orthodox church (as opposed to Catholic or Protestant) mainly because Bishop Innocent treated them with fairness and respected their already existing customs and practices.  He did not pressure them into his brand of religion, rather he served as a good example, and won them over with his activities on their behalf. He translated the bible into their languages.  He interceded on their behalf with the Russian traders to assure they got fair return on their efforts (they were the ones who actually trapped the animals for their furs).  After the US purchase, Roman Catholic and Protestant preachers came in to help convert the lost souls of the Tlingit people. These religious zealots took a much more dogmatic approach, and as a result, the Tlingit stayed with the Russian Orthodox Church by and large.

Bald Eagle being retrained for reintroduction to the wild.

Eagle that was sitting on a tree outside the Raptor Center.

In the parking lot of the Raptor Center is a cell tower. Perhaps not too surprisingly, it was a resting place for these Bald Eagles

We then found our way back to the Visitor Center, and took a bus from there to the Alaska Raptor Rehabilitation Center. They have a variety of Raptors there.  These birds are either recuperating and awaiting reintroduction into the wild, or, if they would not survive reintro-duction, they become part of the birds for display and education.  In addition to the aviary spaces for the birds on permanent visit, there are two areas for the recuperating birds to practice flying again. Each bird in the facility has its story. Probably the most unusual is a bird that had gotten hit by a Fed Ex plane. It was more than a bit shell shocked, and it lost the feathers on one side but physically, it was not hurt. Amazing! After growing its feathers back, it was reintroduced into the wild.

We then caught the reverse bus rides, and got back to the ship at about 3:30. And now is the time for us to rest!

Tonight’s entertainment is another music show, this time entitled the Piano Man. The music was by Billy Joel and Elton John. It was very well done, as have been all the presentations. The gymnasts still continue to fascinate me. Yesterday I thought the woman was small enough to enable the man to maneuver her around very easily, but tonight, comparing her to the other women, she is no smaller than they are — he is just incredibly strong!

When we got back from dinner, we received, as I’m sure everyone did, the debarkation paperwork. It said that we had to have the bags packed and available at 11:00 pm, and be ready to exit the ship by 8:00 the next morning. Panic set in… We wanted to go the show at 9:30, and it was 8:30, so we hurriedly decided what we had to have out with us beyond 11:00 pm and packed the rest. It took awhile, but we made it to the show, and enjoyed it. At the end of the show, as he did each night, Jamie, the cruise director, reminded us what was happening the next day. But what he was saying was not making sense. He said the commentary on the Hubbard Glacier would start at 7 am, and we would be approaching to the closest point at about 8 am. He talked about tomorrow night’s show being an amateur presentation by the members of the crew, and it would start at 6 pm. I’m thinking he must be describing the show for those who would not be leaving at Seward, but how could the ship be at Hubbard Glacier at the same time we were expected to be ashore? Gwen and I went back to the room bewildered. She’s panicking as perhaps she had miscalculated by a day the whole of the next part of our journey. How can she get hold of Albert at 10:30 at night (Alaska time)! We finally got our bearings reset when we realized that indeed today was not the last day of the cruise, but the next-to-last day. The computer was contributing to the problem as it was still on Eastern Time, and thus had already turned over to July 29th, which indeed is the last day of the cruise. Rereading the debarkation notice, we realized that we were due to leave on Wednesday, and it was only Monday night (the 28th). With that realization, we breathed a sigh of relief and climbed into bed and went to sleep knowing we had a whole extra day, and indeed Gwen had planned it all correctly to begin with. 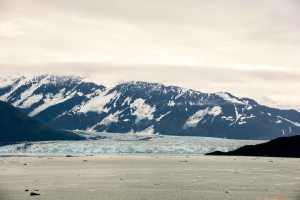 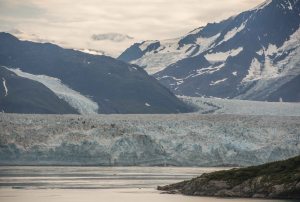 Behind the rock on the right is Russell Fiord. Twice (in 1986 and 2002) the glacier has blocked the Fiord from Disenchantment Bay for short times.

A closer view of Hubbard Glacier

We were up early (as usual), and indeed Terry Breen started her commentary on our approach to Hubbard Glacier at 7 am. We had a spectacularly clear day (not cloudless, but relatively fog-less), and the visibility enabled the Captain to sail the ship to within half a mile of the glacier. It is indeed immense. The glacier is not smooth, as I imagined it, but quite craggy especially on top where the soot of dirt, smoke, and whatever created a gray to black covering that made clear the splits and cracks that marked the top. The main part of the glacier is characterized by the blue color we have now come to expect of the arctic ice, but it is softened by white of snow and / or melt-refreeze that made it seem like a blue creamsicle.

The face of the glacier was not smooth, but also had the visage of craggy mountainsides, only with horizontal lines visible through it where dirt layers alternate with the white of snow.  The water we were floating through was full of ice rocks that had come off of the glacier. These small “rocks” helped us to see how the current flowed, as the ocean saltwater went in a giant counter-clockwise path across the front of the glacier. The glacier, Terry told us, averages 700 feet under the surface of the water where we couldn’t see it to tower as much as 500 feet above it.

Unexpectedly, the area was not quiet. The ice gave off snaps and groans as the air and water trapped in the freezing – refreezing process breaks free due to the warming brought by the daylight. Also giving off noise, much louder and deeper are the chucks of glacier dropping off the main glacier face and falling into the bay waters below. Much of the surface area of the glacier is moving, as it melts and freezes at different rates in different places, responding to the ever-changing stresses put on it.

The sounds of loud booms and wails were audible occasionally, as if large land-based whales were singing their songs to each other through the air. Some of the sound is caused by ice calves dropping off the front of the glacier into the bay. We saw some large drop-offs, not so much as chunks breaking off but rather like sand falling down a steep sandpile raising a high splash as it sinks into the water.

After executing a 540 degree turn to give all a chance to see the glacier wall close up, the Captain aimed the ship back down Disenchantment Bay and we slowly made our way away.

The day passed slowly. We spent a couple of hours in the card room playing bridge, but other than that, we read or napped until time for the crew-based show. The 20 members of the crew did very well, and the show was done with humor and wit, as well as music and dancing. Notable were the couple of bamboo dances that were quite well done.