Wednesday, Nov. 14, 2018 — a long day in a bus.  Our trip today is ultimately to the first of the locks, Miraflores.  However, before we get there, we have some other places to visit.  Once on the bus, we head over the Bridge of the Americas, our first such opportunity.  Note the Biodiversity Museum on the left hand side.

Once we are over, we head into Panama City for a short shopping stop.  On the way, we pass below the terrace we stood on yesterday at the Panama Canal Agency’s headquarters. 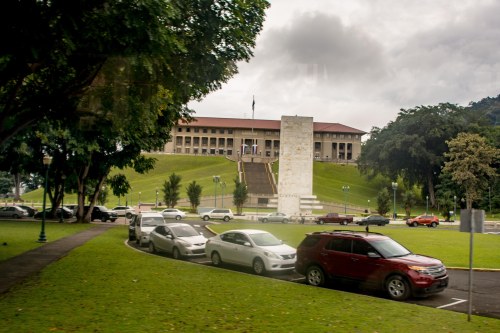 The store, called Rey, is huge;  certainly larger than any market I’ve been in lately.  It has a profusion of products, many of them US-sourced.

Perhaps the best comparison is Costco, or Sam’s Club, although the ones in Michigan do not compare in size to this store.

Time for an economics lesson: living accommodations.  In Panama City, many of the buildings that are viewed as part of the skyline are actually high-rise apartment buildings.  Out here on the edge of the city, there are many apartment buildings, just not so high. 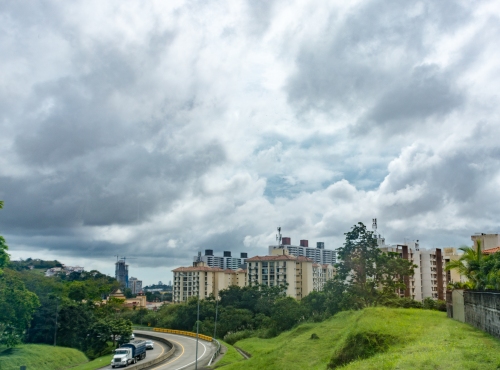 Once out a bit further, the land use is a little different.  Juan Carlos tells us that many of the small houses built on the cleared land are squatters — people who put up shacks and make a home for themselves. 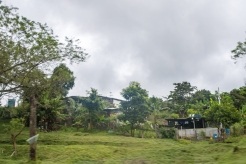 Once they have been there for awhile, they get together with their neighbors and demand city-like services: connection to electricity, water, sewer, garbage collection and so on. 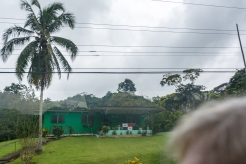 Once those things are in place, they then claim the land they occupy, and they have successfully established ownership rights.

The houses we see along the way are in various stages in this process.  The farther away from Panama City, it seemed, the earlier in this process the buildings seem to be.

Our bus continues on, and our next destination is Madden Dam.  This dam, completed in 1935 was built to prevent the occasionally torrential flow of the once wild Chagres River from interfering with the navigational route for the ships through Gatun Lake and to control the level of water in that lake during the dry season. Water from the dam’s reservoir is also used to generate hydroelectric power and to supply Panama City with fresh water. 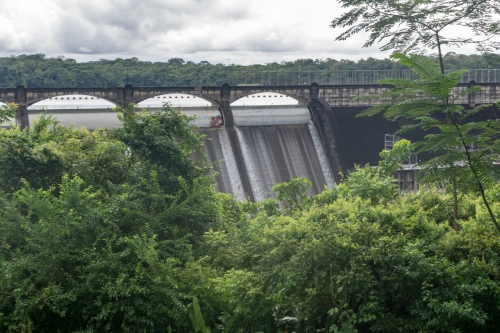 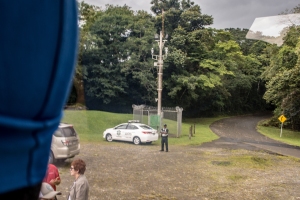 Whenever we stopped along the way, we were visited by the police.  There is only one police agency in Panama, the National Police.  There are no independent city or other entity police departments.

Our bus driver, who was very good at finding animals along the way, pointed out crocodiles in the lake.

On the way to Miraflores Locks, we stop as our route crosses the Camino de Crusces, the historic road from Panama City to a small village on the Chagres River called Venta de Cruces.

The cannon marks Camino de Cruces as it crosses the highway

In the sixteenth and seventeenth century, when Spain controlled Central and South America, gold would be brought to Lima, Peru and other main ports along the Pacific coast then shipped from there to Panama City.  It was then transported overland along the Camino de Cruses to Venta de Cruces.  There it would be put on small boats to transit the Chagres River out to the Caribbean and along the coast to Portobelo.  From there it would be put on ships for the trip to Spain. 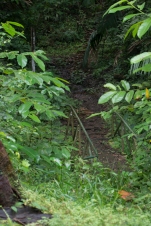 The bridge along the path

Pirates were a constant danger.  In 1671, Henry Morgan reversed the path with an army of 1200 men, devastating Panama City, as well as Venta de Cruces, and taking 250 mules and 600 captives for eventual sale. 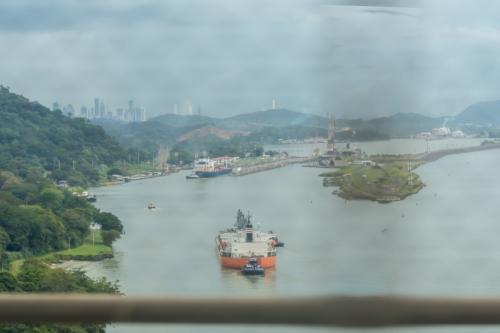 From here, it’s on to Miraflores Locks.  The visitor center sits across from the lock control center.  The control enter sits on the strip between the two parallel lock bay channels.  The viewing decks give access to watch the ships pass through the three lock bays on their way into or out of the Canal.

We are told that the Control Area is quite spectacular, with electrically connected controls to perform all of the operations necessary to the operation of the lock bays, but much to the disappointment of our engineers, it is not on display for visitors.  When it was built, it was (along with many other aspects of the Canal project) a marvel of design, ahead of its time. 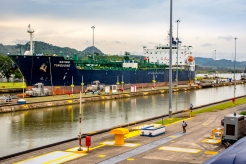 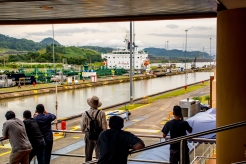 At Miraflores, each ship must pass through two lock bays.  Here, the Navig8 Turquoise, a chemical/oil products tanker, sits in the lock bay at full height, and then 15 minutes later, it been lowered approximately 27 feet ready for the lower lock gates to open allowing it to move to the second bay. 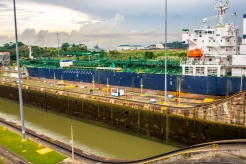 Now it has moved into the second bay, and 15 minutes later, it has been lowered to the level of the Pacific Ocean so it can continue, as shown below.

Ships carry many things in addition to the chemical and oil products carried by Navig8.  They all seem to have similar lines, but they vary widely within those lines depending on the actual cargo they are built to carry.  A couple of examples include

the Golden Rose, a bulk carrier, and the Dusseldorf Express, a container ship.

These large ships fit snugly within the walls of the lock bays, and well they might, as they were built to fit.  They move forward only on their own power, but to be sure they don’t bump the walls of the bays and damage themselves or the locks, the little engines, called “mules” that can be seen at the lower right in the last picture are used.  Through coordinated effort, lines tied to each of the mules maintain the right pressure to keep the tankers parallel to the bay walls.

Not too far beyond the lock bays in front of us can be seen a ship moving parallel to the ships going through the locks.  It’s larger than the ships in the near locks, and it is going through a new set of locks designed and built starting in 2004, and opened for business in 2016.  These locks enable ships carrying up to 13,000 40-foot containers to go through Miraflores.  We’ll visit the parallel new lock structure at the other end of the Canal (Agua Clara) in a couple of days to get a closer look.

We have dinner in the restaurant here at the visitor center, and then head back to the hotel.  Tomorrow, we sail through the Panama Canal!