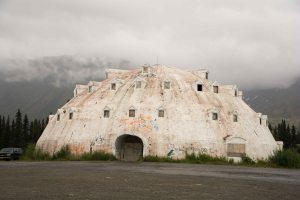 The “Igloo” on the way to Denali National Park

Today’s trip was long, but not bad. We got up and were on the road at about 7:00 am. The trip to the park took us until noon, but it was punctuated by dialogue and pit stops, which made the morning go faster somehow. Near one of the pit stops was what some entrepreneur hoped to be a hotel/casino, but the building lacked enough fire exits, of all things. It is shaped like a very large igloo. The building is closed currently, until someone with enough money to install the fire exits, and enough guts to buy the risk of sufficient business comes along.

View of Denali as we were entering the park 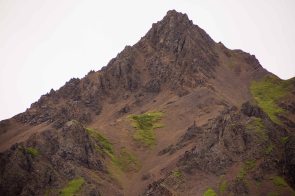 Almost dead center on the upper part of the green patch is a Dahl’s sheep at least 5000 feet up.

A second grisly, also foraging for roots and berries. 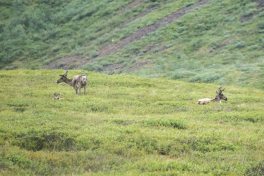 We saw quite a few caribou (raindeer are domesticated caribou, we were told). Note the fawn by the female on the left. 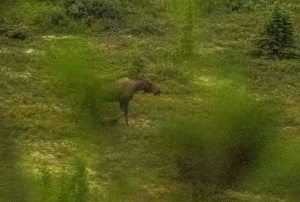 A moose walking across the tundra.

After a lunch at the park entrance, we boarded a bus for the trip into the park itself. This trip was about 90 miles, with lots of stops along the way to look at animals. We saw two grizzly bears, 30 or so caribou in three groups, a lone Dall’s sheep high on a hill far away from us, two moose, at some distance from us, and a fox with an Arctic squirrel in its mouth walking jauntily down the road as we passed by in the bus. This was quite a haul for the drive in, but we were not able to see Mt McKinley for the clouds and fog. The lodge we stayed at is a collection of log cabins which were apparently set up by a Fairbanks judge who decided to try to be the first to climb Mt. McKinley, but failed, and on his way out decided to try his hand at gold panning in the Eureka River. He succeeded beyond his expectations, and started a local gold rush in the process. The Kantishna Roadhouse came into being. The meal was good, and it was the first time we as a group (except our Swiss family, unfortunately) were able to eat together.

Tomorrow we get to explore the local terrain, and Gwen will get a message!

The tundra is springy to walk on. Note the sparse distribution of juniper trees going out to the horizon.

This morning was interesting, but not for the reasons you might suspect from where we were. I went on the “easy” walk, essentially a leisurely tour down an old mining road for about a mile, and then back again.  It took almost three hours to complete, so it was not strenuous. The group was led by Libby, a recent biology graduate from a small university in Vermont who is going on from her summer job here to two years in Madagascar doing hydraulic engineering and plant technology for the Peace Corps. In addition to her was a lady from Massachusetts and two couples from Dusseldorf, Germany. I got some chance to relocate my long lost German, spent some time deciphering the Bostonian accent, but most of the time we walked along examining the tundra flora we passed using Libby’s biological understanding.  The most interesting item was the wormwood plant which, it turns out, is a good insect repellent if you rub a leaf of it between your fingers until it turns tender and smells something like mint, and then rub it over any exposed skin areas.

Gwen went over to Wonder Lake with Marlene (the wife of the leader of the expedition) and Robin.  Once there, they walked over two miles along the banks of the Lake enjoying the scenery. Unfortunately, Mt McKinley did not pop out of the clouds to greet them.  This is a constant theme in Denali, as the vast majority of the time (so we were told), the micro-climate of Mt McKinley keeps it surrounded by clouds regardless of the weather in the main multi-million acre park.  This day, the sun didn’t shine for us in Denali at all, so even if Mt McKinley had been in bright sunshine, there was no chance of glimpsing it. 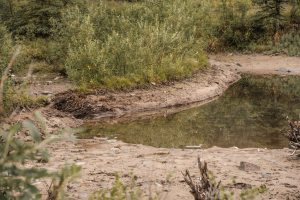 We regrouped for lunch in the main building. After lunch, Gwen and I read and lazed around until 2:00, when there was a presentation about the sled dogs they use to get around in the park during the winter. The presenter is the son of an Iditarod competition participant (13 times), and he himself has done the “junior” Iditarod, which is 250 miles as opposed to the 1025 miles. He won that race once.  He did a very good presentation, and I learned a lot about the strategy racers employ, as well as the basics of dog sledding.  One story he tells is of the time his father come into a checkpoint just behind the leader.  The leader proceeded to feed his dogs and to lay out hay for the dogs to sleep on.  Presuming he was taking one of the mandatory rest stops, his father did the same and then went ahead and took the booties off the dogs.  The leader, as soon as he saw this, got his team up and off they went.  His father had to re-boot his dogs, a time-consuming process, before he could give chase, and the result was a considerable extension of the time between them.  Tactics make a difference!

Later on, I met up with Albert, who took me through his use of Adobe’s Lightroom, a picture developing tool like Apple’s Aperture, but with slightly different and easier-to-understand tools. He showed me a little bit of how he uses Adobe Photoshop as well. I’ll be trying his tricks on my photos once I get back to my computer at home.

Gwen panned for gold (unsuccessfully), and then accompanied Robin on another excursion, this one to the Fannie Quigley cabin. This was a 4’10’ woman who came out from Nebraska to go to the gold rush (late 1800’s) and settled in what is now Kantishna. Gwen can tell you the story.

This old cabin was the assayer’s home on the Kantishna property, where he and his family lived in the late 1800’s

This evening was a presentation by Libby (the leader on the hike I did in the morning) on animals in Denali, their tracks, scat, and other signs of their existence. It was well done, going through about 15 of the most prevalent animals and giving good information on each. Lots of pictures and good stories.  From her, I learned enough to know how little I knew about tracking animals in the wild.  On our journey this morning, we found evidence of only two animals, a moose (scat several days old), and humans (a tent pitched on the side of the hill opposite the river from where we were walking).  The only other evidence we saw was a large self-propelled tractor shovel slowly making its way down the same road we were walking on.

Now its off to bed, and then tomorrow it is on to Talkeetna.