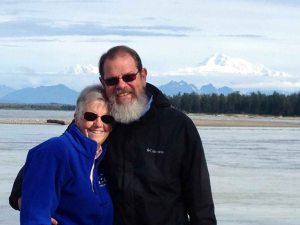 Mt McKinley over the Talkeetna River

We got up late, got dressed and were just about to go out of our room to walk into town for breakfast when Marlene knocked on our door. They were looking for the mosquito netting to give to the Herren family for today. Yesterday’s adventure for us is this morning’s adventure for them, as Dennis only has enough ATVs for half our group at a time. Unfortunately we don’t have the nets, but Marlene offered to take us into town. The Herrens were already in the van, so we joined and Marlene drove us to Dennis’s ATV place to drop them off. She then took us through town to the Talkeetna River, where the view of Mt McKinley was bright and clear. What a sight! S he was kind enough to take our picture with the mountain in the background. She dropped us off at the Roadhouse, where they served pancakes larger than the plate, and we got the chance to taste not only the blueberry pancakes, but reindeer sausage as well. Excellent breakfast.

We walk back to our hotel, check out of our room by noon, and get picked up at 1:30 to go to the dog sledding place.

The pack leader telling his partner what to do… 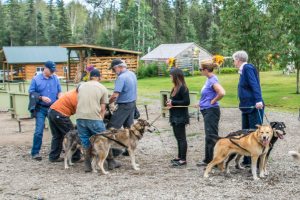 Grabbing a dog or two to help solve a problem.

Getting the dogs on the line 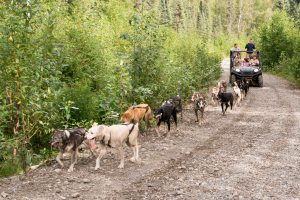 The dog sledding place: Dream a Dream Dog Farm (Willow, AK) is owned and operated by Vern Harper and a woman whose name I have forgotten. Linda, one of the folks who works there, gave us a good half an hour’s presentation on the Iditarod, the “how” of the run, the “dress” one needed to survive, and the details of Vern and the lady’s history with the various races that have been spawned off of the success of the Iditarod.  The race covers just over 1000 miles, running from Willow to Nome, in March of the year.  The race has a ceremonial start in Anchorage, and then the actual “for the money” start in Willow the next day.

The race traces its roots back to dog sled races for money in the early 1900’s and the famous 1925 “Great Race of Mercy”.  A diphtheria epidemic in Nome in early 1925 required antitoxin to be shipped from Seward, and as there were no other alternatives at the time, it had to be done by dog sled.  The serum was sent by train from Seward to Nenana, and then relayed by dog sled (using 20 mushers and over 100 dogs) over the remaining 674 miles, arriving five and a half days later on February 2, 1925.  In 1967, a 25-mile race to honor the early mushers and their dogs, and the Mercy run was successfully held near Anchorage.  In 1973, a much extended race, running along the Iditarod trail (originally marked out in 1908) was held, and has been run every year since, growing into the largest competitive sporting event in Alaska.  It has reawakened interest in mushing and in raising sled dogs, having spawned a number of other dog sled racing events.  It has more than succeeded in counterbalancing the decline in interest in dog sledding brought about by the advent of motorized skimobiles in the 1960s.

As seen from the Quad — heading down the trail

The water was pretty deep, but the dogs were able to keep pulling

The puppies coming out of their enclosure

Puppies in the woods

After her presentation, she took us out into the back yard where there were about 40 dog houses, 4 rows of 10 each, with dogs outside of most of them. They are very energetic, jumping around, and clearly they know they are going to be out pulling. Sure enough, out comes the line to which 16 of them would be attached, and they went nuts, tugging, barking, whining, baying, bumping into those near by, and in general making themselves known. Three of the people started moving the dogs they identify as the most energetic from the leads from their dog houses to the leads on the line.   There are two connections to the line, one at the collar, and one at the back of the pulling harness. Just as we were told, once they get hitched, their first instinct is to pull on the harness line. And pull they do.  About half of them are connected, and all of a sudden, one of the harness hitch lines to one of the dogs breaks. All hands are called to help (including ours) to restrain the dogs so that none of them get hurt. Once under control, the line is replaced, and the dogs are reselected to go onto the new line. Soon all is well, and there are 16 dogs connected to the line. Oh, yes, what is the line connected to?  As it is summer, and there is no snow, It is connected to a large motorized quad vehicle with enough seating space for 6 to 8 people to be pulled along.  The driver uses the engine to keep the line taut, thus giving the dogs exercise without overly straining them. The family Herren and Adam are the first riders. The rest of us ride in a van to the half-way point, where we traded places to get our chance to ride back to the kennel area.  The ride covered about two miles each way. The dogs were given two rests along the way, and on this particular path had several puddles (one deep enough to get water on the floor boards of the Quad) to navigate through.

The dog leaders struggling to get going 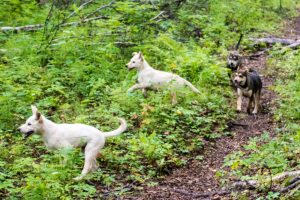 The dogs were great, and riding behind them was fantastic. After the dogs were unhitched, they were given a piece of frozen salmon to eat (a treat for them).  Two ‘retired’ dogs (ex-Iditarod runners who are now too old to compete) were given some as well, and I think the rest of the dogs eventually got something, but I may be wrong. Anyway, we then wandered down to see the puppies. Linda unlocked the gate and let them out to take them on a walk through the woods nearby. We walked along behind, and although the dogs ran into the woods, out again, and back in again, we kept going down a path that eventually wrapped around and came back to the kennel yard. It was especially fun as the older Herren daughter (Chinena, aged 10) was practicing her English with Gwen, who was practicing her German back to her. All and all a good time was had by all.

We got back to the hotel and had dinner at the Bistro, a version of Starbucks within the hotel. Not the best, but close by…

Matanuska Glacier is in the background

The glacier from the parking lot

The glacier has numerous grooves carved by running water

Careful not to step into the water tracks, they may be deeper and wider than you suspect… 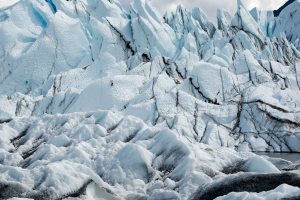 View of the face of the glacier. See the climbers near the center? 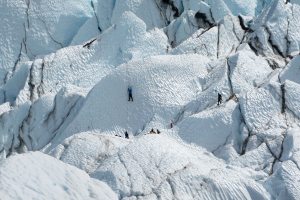 Today we started out at 9:00 am on a two hour van trip to the Matanuska Glacier. The glacier is 4 miles across the front, and 27 miles long. We have a very kind guide, Abbie, who leads us through the process of getting our crampons for our shoes, and a check to be sure our bags had the right stuff in them.  The glacier trek was fun — walking with crampons was not as hard as it seemed, and with the crampons, it was easy to keep from slipping on the ice. The ice was intermixed with dirt and rocks of every size from small pebbles to large boulders. Melt water ran in groves created as the glacier melted, creating lines and crevices in geometric patterns. The ice when the sun shown in the right places came out the blue color we had seen on the other glaciers we had seen. There were several other parties out on the ice. Two guys were on an easy slope practicing climbing, while in another area there were people practicing more difficult maneuvers. It was fun. Abbie was very helpful, pointing out the aspects we didn’t know about before, and helping set the path for us so we didn’t have difficulties.

A look back as we were leaving the walking area

Glacier lake with the mountains behind

We had a late lunch at the Long Rifle Lodge next door to the glacier walk area. It provided great views of the glacier, and as it used to be a hunting lodge, had lots of stuffed animals inside to help set the atmosphere.

Tomorrow is an opportunity to explore Anchorage — we’re going to the air museum and the animal conservatory.