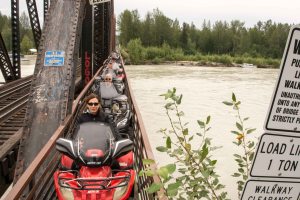 Today’s activity was to get on ATVs and drive ourselves back into the (close by) back country with Dennis. The first step was learning how to drive the ATVs, as most of us (including me) had never driven one before. Dennis was patient and a good guide in our learning, and soon we were all riding along the side of the road, and where possible off the main roads. We learned a bit of the history of Talkeetna from him, and shortly were headed down a strictly ATV trail that ran along the railroad tracks. Two bridges were our most challenging parts, as the ATVs were as wide as the area on the bridge beside the railroad tracks fenced off for us to use. Keeping going in a straight line was harder than I thought it would be as it was hard to keep the tires from rubbing on the rails that marked the borders of our path. But after the bridges, the path was wide enough for two ATVs to pass each other going along, so there was plenty of room. The road was very much like the dirt part of Bridge Lake Rd in Clarkston, with potholes and occasional washboarding all along it. It was fun to ride the quads. If you let the person ahead of you get a fair distance away, you could gun the engine and get up to 35 mph to catch up. For the washboard parts, it was easy to stand up on the foot boards and use your legs as shock absorbers. 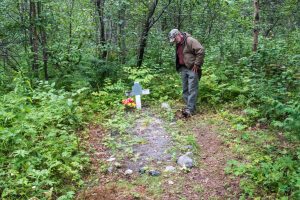 Dennis and his father’s grave 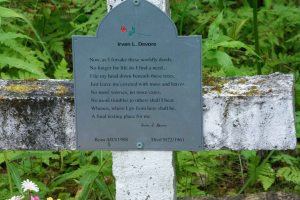 The poem his father wrote as his epitaph

Our first stop was the old homestead, where Dennis’s father and mother brought their family (he and his 3 brothers and a sister) to live when they first came to Alaska. It was 1959, and they came from Detroit where the jobs had gotten scarce with a group of families.  Alaska was just coming to the end of its land-grant days, where if you staked out an area (of as much as 160 acres), farmed it for three years, and built you home on it, the state would grant you title to it.  A group of Dennis’s family friends banded together for the trip, a modern version of nineteenth century wagon trains. It took them three months moving slowly as breakdowns, arguments concerning which way to go, and health issues interfered.  Dennis’s family lived in a camper sitting on the back of a pick-up truck, which made for very crowded conditions.  When they got to the Talkeetna area, Dennis’s family marked off their land (160 acres bordering the railroad track) and started the process of homesteading. They cleared some land, started to build a log cabin, and planted barley. The crop didn’t take, but they were able to find work in the town and surrounding homesteads, and thus got enough money to get the materials to finish the cabin. The homestead now has the old pick-up based camper and the remains of the cabin itself.  It is falling in on itself, but the highlight of the site is the grave of his father 100 yards off away in the woods.  His father was a poet (like Gwen’s father), and he wrote his own epitaph.  We spent a few minutes cleaning the weeds off of the grave in remembrance.

The pond gives Chena plenty of opportunity for exercise

Adam gets some training on shooting a large rifle

Onward we went, and eventually we came to Dennis’s current homestead. This one has been cleared for several of acres around the much newer main house, and there is a clear creek including a small waterfall with a pond behind running though the back of the property. It’s a log cabin, like the original, but much more spacious and very up to date. He uses a gasoline powered generator for electricity (it runs only when he needs it, mainly in the evenings).  He pumps his water from a well, and uses propane for his other functions.  Heat comes from a central pot stove, which burns wood.  It is enclosed and captures the byproducts to ensure there are no stray sparks to set the place on fire. The house is very well insulated and is comfortably warm, even though the fire only has one log burning.  Besides, we were warm from our ATV trip in.

We ate lunch there (hauled in by Dennis on his ATV), and met his dog Chena, an 8-year-old german shepherd who loves to chase sticks thrown for him. The lunch was set out by Dennis’s close-by neighbor Patricia (she, her husband and son live 5 miles away).  She had baked a marvelous banana bread which we eagerly consumed for dessert.  Dennis took us to the creek, to a small lake area where he threw the stick and Chena dove in to retrieve it.  A few of us took up Dennis’s offer to let us shoot one of his rifles at a target he had set up along the creek bed.  Given the choice of shooting the “man’s gun” or the “ladies rifle”, you can guess which one we chose: the one that shot .375 shells, at a target about 200 yards away. Adam was the first to go, and of the four of us who tried, he was proved to be the best shot.  I enjoyed the opportunity, and managed to get close to the center. It’s harder than it looks, but Dennis is a good teacher.

Adam came out best of the four! 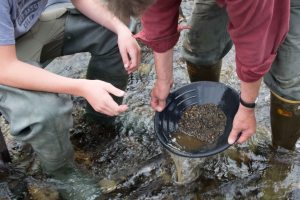 Gwen and the ladies hung around the cabin talking to Pat.  Her family’s cabin is much more primitive than Dennis’s.  They don’t have running water, nor any sewage system.  They have an outhouse, which serves their needs even in winter.  Gwen says they were from Nebraska, came here about eight years ago, and are quite happy about it.  Their son (13 years old) is home-schooled, at least for now.   Outside, Dennis helped us pan for gold in his stream while telling us stories and answered questions about himself and life on his back country estate.  This was a great opportunity and we learned a lot.  About 6:00 we got back on the ATVs and rode back to Talkeetna. The trip each way was about an hour. We dropped off the ATVs and Albert conveyed us back to our lodgings.  We walked into town for a nice dinner at the Denali Brewing Co, then it was back to the lodgings and good night’s sleep.