This is the diary of our trip to Alaska, starting with a cruise up the west coast from Vancouver, BC in Canada to a number of stops in southwest Alaska.  After the cruise, we went on a “Planet Earth Adventures” trip with ten other people who quickly became friends and traveling companions.  That trip was led by the owners of the travel company, Albert and Marlene Marquez.  Gwen set up the whole trip with Albert, and having now completed it, I can honestly say she did an excellent job.

View from our hotel in Vancouver

Measured on the scale of “did we get there on the day planned?” this was a good trip   The journey to Vancouver via American Airlines is a three-part plane ride. We arrived at Flint thanks to Hank Kerr with plenty of time to spare, and happily the plane departed on time. The plane to Chicago arrived on time, and the wait there for the plane to Dallas was relatively short, and retained the original schedule. Once in Dallas, however, the trip ground to a halt. Four extra hours wait and one terminal transfer later, however, we were on-board the third plane of the day (a different plane than the airline had originally intended), and heading to Vancouver.   Arrival was much less effort than anticipated, as despite the late hour, there were plenty of taxis to take us to our hotel.  Without further delay, we got to our room, and dropped into bed. 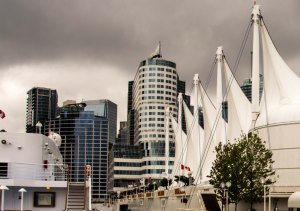 The Vancouver dock where our ship is moored

Outdoor swimming pool on board our cruise ship 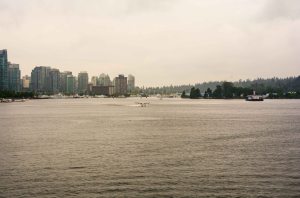 Vancouver harbor. Note the seaplane. These were a common sight in the harbors we visited.

Gwen’s cousin Ann, who lives in Vancouver, met us at our hotel, and we quite happily talked until we had to board the bus to take us to the port to board the Regent Seven Seas Navigator. This cruise ship is larger than the one we were on in the Caribbean at the end of 2012, as this ship has on board 400 passengers and 300 crew, versus 200 passengers and 200 crew. This ship is still small enough to have reasonable service, but larger so it can handle the waves better (at least that is my hope).

Once checked in, Gwen immediately unpacked us, and we were off to do something we were to find the staple of our time on board: eat! We had a nice lunch, and relaxed until dinner. We had dinner reservations in their premier restaurant, which indeed was premier. The steak and lobster was superb, while Gwen’s prime rib was also very good.

Tomorrow is a slow day, as it will be spent on board as we steam along at 15 knots up the coast of British Columbia toward Alaska.

An easy day. We spent the day reading, and helping put a puzzle together. We also explored the ship, but not much else. We were a bit worried, as it was just this kind of sailing that got me seasick on the Caribbean cruise, but dramamine did its job, and I didn’t have a moment’s problem. This cruise had its opening social foray, a “block party”, at 5:30, and we went out into our hallway, and met some very nice people. We have since seen several of them in our excursions, so it was worthwhile. Gwen got tired, but I went to the Broadway production later in the evening, and was pleasantly surprised. The production was a few songs from each of about six current Broadway productions, sung and danced by a troop of about eight members accompanied by a live band. It was professionally done, and the result was quite good. Afterwards, I found the piano bar, and enjoyed a woman who liked Carol King songs. The band that had backed the Broadway production changed venues and played Motown music in arrangements that sounded more like musak than music, unfortunately. I then joined Gwen in our room and we slept soundly through, catching up a bit on our sleep.

Today started our exploration of Alaska. We were up early enough to watch the docking of the boat at Ketchikan. The day was cloudy overhead, something we are beginning to get the idea is the common weather pattern here. We got our breakfast at the Italian Restaurant, which was very tasty. I had an omelet, and Gwen had oatmeal. The food here is quite good — something we were used to from our first cruise, and this trip has so far only furthered. Our excursion started at 10:30, so we got off the boat and decided to walk around Ketchikan ahead of the excursion. We did a bit of walking, but it started raining almost immediately, so we quickly got the the point of the walk (the candy store: Kechi-Candy), bought some (got to have our chocolate!) and then waited for the excursion to begin. 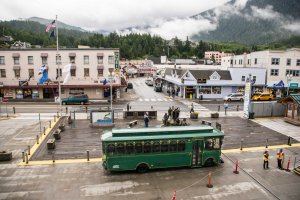 View from our cabin before we got off in Ketchikan.

Ketchikan docking area. Overcast is going to be the theme on this trip.

Dancing to the beat of a hand-held drum, and chanting their welcome for us.

When a dance is complete, the dancers turn their backs to the audience, showing off the clan symbol. 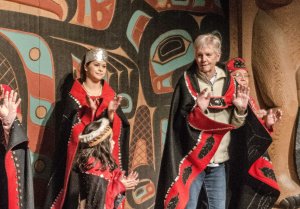 Our tour was to an area just south of Ketchikan on the island we are on to a place where the largest of the three native populations has their central community. This native population is called Tlingit (pronounced “clinket”), and the location is called the Saxman Village. The village was established in 1896, combining a number of smaller such Tlingit villages into one. It is named for the priest who organized the establishment of this area, although he died before it could be completed. Apparently the native populations were suffering a small pox epidemic, thus the need to combine villages to enable a sustainable population to be maintained. Since the Alaskan gold rush was fairly close in time to this, I can only surmise the connection, but I’ll have to do some investigation to sustain my suspicion. The central part of Saxman village is the family lodge (beaver family, it turns out). This was built in the late 1890’s out of red cedar (one of three local species that are commonly available, the other two are spruce and alder). The cedar was fragrant as we walked in. Inside we were seated on wooden chairs (also made from cedar), and treated to a traditional dance and song ceremony. The singing and dancing was done by a group of Tlingit family members spanning ages 7 to 77,   It apparently is traditional for the Tlingit to welcome visitors in this way. For the last dance they invited anyone who wanted to participate, and Gwen volunteered. She was loaned a costume (or regalia, as they called it) and found a youngster who served as her mentor and guide.

The Tlingit elder greeting one of the passengers. 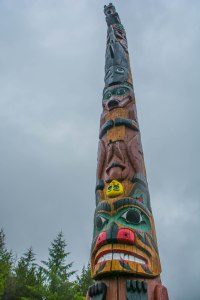 Earlier we were given a short film shown by one of the Tlingit leaders explaining who they were and giving us some background, and then introduced to one of the elders who was doing traditional beadwork. 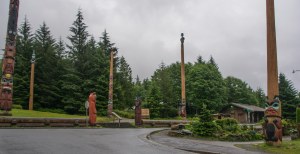 Saxman village green, marked by totems. The totem carver’s workshop is on the right.

Abraham Lincoln’s totem, carved from a picture of his head and shoulders. The carver had no idea of his proportions, so we were told.

After the singing, we were taken to the local Totem carving shop, operated by one of the more famous Totem carvers (Nathan Jackson). Another of the Tlingit leaders gave us some information on the carving, and showed us some of the traditional tools. She told us that Totems cost anywhere from $1500 per foot to $4-6,000 per foot, depending on the skill level of the artist (apprentice to master craftsman). There were some interesting totems around the entrance area to the Tlingit house. Most had animals (birds such as eagles and ravens) on the top, but one had a likeness of Abraham Lincoln, and another had Seward’s likeness. The Lincoln one was carved to commemorate a visit from an American ship during Lincoln’s time as President, while the Seward one commemorated a visit by him to see his acquisition. He had apparently been the recipient of four different Pugwash events (large party where the local tribe invites all the friends and neighbors nearby to join in, and in the process spends loads of money). The idea, is that these Pugwashes are reciprocated, and as Seward didn’t do so, his totem is actually a totem of shame! It is colored as such with red ears and cheeks. The Tlingit folks were at great pains to help us understand their culture, and to feel their appreciation for our visit, and for our interest in their culture.

Chopping into a vertical post. The top part is falling behind.

Chopping a vertical log as he is balanced about 10 feet above the ground on a simulated tree branch.

The second half of our excursion was to see the lumberjack show. I thought this was going to be a part of a greater competition (you know, like a summer series), but it was a one-off for our fun, done twice a day. There are two two-man teams, one team member competing in each of eleven events. We as the audience are divided into two groups and cheered for our team while booing the opponents. The competitions apparently are real enough, and I believe they are doing their best to win, but it is nicely staged.  The eleven events are as one would expect of lumberjack competitions.   The competitors chop wood logs in half, both vertically and horizontally, and up high on top of a vertical log balancing on a beam wedged into a vertical “tree”.  They saw off disks with a single and double-man cross-cut saw, as well as with a chain saw, and throw axes at a wooden target. There are competitions to tie up and belay a log from one place on stage to another. The final event is the log-rolling, where one man from each team has to get his opponent off his log two out of three times. It came down to the end, but our team won (cheer, cheer!).

We then walk back to the ship and re-embark. We’re now on our way to the next stop, where we’ll visit and go on a wildlife watching tour in the afternoon. One thing that is noticeable to me is the number of float-planes that share the waterways we have been cruising in (especially the ports). They apparently look for clear water (and air, presumably), gun the engine and they are off.  Some are fast to get up, and others take their time.