Gwen and I are visiting San Francisco, but (as most of you know) not for vacation.  Sandy had her right knee replaced, and now in very recent retrospect, it is a tremendous success.  Gwen has been at the hospital with her each day, which leaves me free to “roam about the town.”

I have taken advantage of this luxurious time to visit on each successive day a museum close by to the hotel (right in downtown SF).  On Wednesday I visited the de Young Museum, Thursday the California Academy of Sciences, and on Friday the Legion of Honor.  Each has been fun to visit.

The de Young Museum is an art museum, with two exhibits taking up most of its floor space at the moment.  The first, and for me the most interesting, is a collection of David Hockney’s art work.  The second, and interesting from a different perspective is a collection of jewelry and other objects produced by the Italian company Bulgari between 1950 and 1990.

David Hockney is a contemporary artist whose work I have been totally ignorant of until now.  Not a surprise, I guess.  He was born in 1937 in the Yorkshire area of England, and was educated at the Royal College of Art in London.  The exhibit featured many portraits, mostly watercolors as a starter.  Early on, he created a form he called “joiners” which are photographs taken from a number of very similar angles and then pasted together.  He came upon this approach somewhat by accident while trying to avoid the distortion of wide-angle lenses at the edges.  His early version were made with polaroids.  There were only a few of these joiners on display in the exhibit, but enough to see how his interests evolved.  The most intriguing aspect of the show were the larger-than-life paintings and subsequent videos (created by joining together at the edges numbers of smaller paintings and videos).  These (at least the ones on display) are largely landscapes.  Each wall-size painting is done as a gathering of smaller (not really small, but say 16 X 40) canvasses each done (or started) at the original site, and then joined together to create the “bigger” painting.  Now imagine doing this several times throughout the year in the same spot to get at the seasonal differences.  Next step, align a number of digital cameras in a grid, stand them up on a moving vehicle, and then slowly drive the vehicle down a country lane.  Now play back the videos on large (60 inch diameter) screens aligned on a wall in an almost seamless grid.  Then come back and create the same video agaIn several times throughout the year.  Lastly, arrange these wall-size video montages on each of four large walls in a single room so you can see a season on each wall and you have the climax of this sequence.

This is but one theme of this collection.  In another area is to be found a series of large iPad devices each with a sequence of ‘paintings” Hockney did using the iPad and “Brush” software.  Who knew software-on-pixels could create such interesting art?  On more than one of these larger-than-life iPads the sequence of pictures displayed gives way to a quick-speed brush-stroke-by-brush-stroke recreation of the picture.  It is fascinating to watch how the picture is created using various “brushes”, then colors, throughout the process.

Other themes of the show: in one room are 25 charcoal paintings, yet another medium he has conquered (there are acrylic and oil on canvass, as well as the watercolors, pictures and videos already mentioned).  In another large room is a portrait collage he created using copies of portraits from as early as 1200’s through 1900, which resulted in his conclusion that starting about 1450 artists used aids such as “camera obscura” images projected on screens to assist them in creating a more realistic image.  Thus the development of perspective as well as realism in art at about that time.  He published his results and his rationale in 2001.  The collage, covering almost three walls, is arranged by date of origin, and shows plainly the evolution to life-like imagery.

The other exhibition at the de Young is the Bulgari.  Bulgari is now an international luxury goods and services company majority-owned by LVMH (since 2011).  LVMH is a conglomerate of well-recognized brand names, such as Louis Vuitton, Moet Hennessy, and Tag Hauer.   The exhibit, however, is focused on the period from 1950 until 1990, when the company was owned by the family of its founder.  In the early part of this period, the jewelry store (flagship in Rome, Italy) grew from a boutique jeweler to an international success story, helped along mainly by the fresh designs of Giorgio Bulgari and later by the business acumen of his son Gianni.  The style they got to be known for included colorful necklaces (including precious and semi-precious stones in a smooth (not cut into faceted faces) shape in settings of gold, silver and very occasionally platinum.  These necklaces changed in length and character to match the fashion styles created by the couture houses, anticipating (at least keeping up with) the changing clothing styles during this period.  On display are necklaces, bracelets, rings, broaches, and watches from the company’s vaults.  A few were worn (and owned) by Elizabeth Taylor, but many have been worn by the likes of Marilyn Monroe, Princess Diana, as well as any number of other socialites and stars through those years.  One bracelet type that with many examples is shaped like a snake with a watch in the bejeweled head.  The snake wound around the arm several times with each link having springs hidden inside to enable a snug but not uncomfortable fit.  Other jewelry created included broaches and necklaces in a style they named with the Italian word for “trembling”.  The stones and metal settings were set atop small leaf springs so that they shimmered as the wearer moved.  In their move to grow clientele, Gianni in 1966 opened shops in New York, Paris, London, and selected other cities.  The exhibit certainly gave me an understanding of how product imagination combined with business sense enables a company to grow through the years.

Before I go on to the other two museums, let me include a couple of pictures of the view from our hotel room. 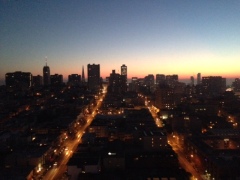 The one on the left shows the whole view  from the window in a panorama format.  The right one shows the early morning views I got before I went out to visit the museums.

The second day i visited the Museum of Science.  I enjoyed the exhibits, and the change of pace from the art exhibits of yesterday.  The exhibits focus on topics of interest to California (and why not?) such as earthquakes, as well as issues of a more general interest, such as the environmental impact of the loss of rain forest areas.  The exhibit on the rain forest was fascinating.  It covered four “stories” of the rain forest, starting with the ground and lower level (with roots, streams, frogs and so on), then up to the mid-tier, with birds, branches and other animals.  Up to the third level you then go where the sunshine and air allows lots of birds and butterflies to get around. 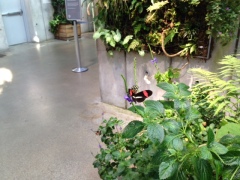 Then it is into the elevator, down to the lowest level, a view of the streams from below (including the variety of animal life).  The afternoon was taken up primarily with two planetarium presentations.  The first one talked about the history of the earth’s more violent activities, earthquakes and movement of the earth’s surface over time.  The second one was about violence on a larger level — collisions of cosmic proportions — and the role they have played in creating the earth as it currently exists.

The third day I went to the Legion of Honor, another art museum.  Their visiting exhibit shows the work of Anders Zorn (of Sweden).  I was very impressed with Zorn’s work.  As described on the web site: “One of the most famous living artists at the turn of the 20th century, Anders Zorn (1860–1920) dazzled the art world with his bravura paintings, watercolors, and etchings. His early travels took him to Spain and Algeria where the intense color and light inspired the virtuoso watercolorist to perfect his craft. In Paris he emulated the Impressionists as a chronicler of modern life, while in America he rivaled John Singer Sargent as the most sought-after portraitist of glittering high society. Back at home Zorn captured his native folk culture and the serenity of the Nordic landscape.”    The exhibit adds some considerable information to this description, as you might expect, but this hits the highlights.  Zorn was born in a small farming community, which set two themes into his life.  First, he shaped his artistic talent to take best advantage of what was financially on offer, and second, once he and his wife were solvent, they spent their spare time and money insuring the maintenance of crafts and cultural aspects of their Swedish heritage in the area of Zorn’s growing up (around Mora, Sweden).  He lived during the time of the Impressionists, and took from their approach what he could use, but he was much more focused on his customers.   He was a portrait panter extraordinaire, and he used this talent and his social sophistication to build clientele from the top tier of society.  He had as subjects three US Presidents (Taft, Cleveland, and T. Roosevelt), the Swedish King, and many of the well-to-do of turn-of-the-century society in the many places he spent time.  He visited the US seven times, lived in England and Paris for several years each, and then finally resettled he and his wife back in Sweden.  Early on he perfected the art of representing water (lakes, rivers, ports, etc.), and his skill at this is truly exceptional.  His other great subject was himself — he did quite a few self-portraits.  He and his wife never had children, so when she died (in 1942), their estate, which included a museum of art works they had built up over their life, an outdoor museum of some 40 buildings which they had moved to the area where they lived in Sweden (ostensibly to ensure that the craftsmanship needed to build such houses would not get lost) and his art studio retreat (a building a few miles away from their home) all were willed to the Swedish state.  He remains a well-known artist in Sweden, but the rest of the world has more or less forgotten him.  Why?  One theory is that he created no new schools of art, he was “just” one of the greatest creators of artwork of his time.

The Legion of Honor houses one of the largest collections of Rodin sculptures outside of Paris.  It seems one of the patrons of the museum (Alma de Bretteville Spreckels) had an early interest in the works of Rodin, and her collection is now the center of the Legion’s sculpture collection.  There are many other works of art, running from the early 1500s to the Impressionists.  I only had a brief walk-through the galleries after visiting the Zorn exhibit, but enjoyed it.

On coming out, I started down the back side of Lincoln Park to find my car, and happened upon this view of the Golden Gate Bridge.  What a surprise!

So, I am quite happy that Sandy has successfully survived the replacement of her right knee (and at this point is still recovering at a speed that far exceeds all predictions).  I am happy that Gwen volunteered to spend time helping to assure her stay in the hospital was a comfortable one (at least as much as it could be).  This happy confluence of events provided me with the opportunity to visit some fascinating exhibits, and to see parts of San Francisco I had not seen before.  Merry Christmas, and Happy New Year 2014!