The weather continues to smile upon us.  Chilly mornings give way to low-to-mid 70’s and blue skies by mid afternoon, cooling down a bit in the evenings. The sites for today include the Wisconsin Capitol building, the Museum of Contemporary Art, the Memorial Union, and the Botanical Gardens.  We decided to do a late start, as the art museum doesn’t open until noon.  We did get an early breakfast, however, at Denny’s. The Capitol building is indeed remarkable – a marble rotunda under a spectacular dome that rivals any I’ve seen 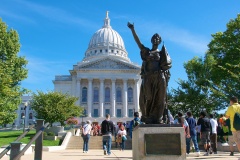 is surrounded on all four sides by office areas labeled in black on translucent glass with the names of those inside.  We arrive as one group of school kids are leaving, and get intermixed with another arriving.  To say the least, it makes for a noisy experience. The Museum of Contemporary Art indeed opened on time.  Its main displays are part of an on-going reference to Wisconsin’s contemporary art scene called the Wisconsin Triennial.   As is my experience with contemporary art, some of it is enjoyable, some of it is trite, and all of it is thought-inspiring.  Some examples: an eight-minute looping video of a large waterfall with tourists moving in front of, taking pictures of, and then leaving the scene; a video of people first describing their thoughts on, and then actually falling from a standing position; a floor-to-ceiling cascade of orange plastic ladder-fencing; a 15-minute video with sound effects put together around the titled theme “The End of Angels”; a pictorial entitled, “Industrial Still Life”, with concrete, steel, pavement, and other structural elements; and an exhibit of photographs of places where homosexuals had been beaten to death in some notorious incidents of the last 20 years.  In another exhibit hall, there are examples of works by Diego Rivera and the other leaders of the early 20th century Mexican art world. 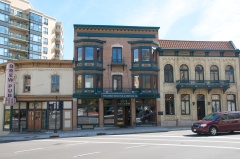 From here, we go to the Great Dane pub, another excellent recommendation from Suzie.  Gwen and I share a Mac and Cheese with brat plate, in addition to a great local stout (for me), and ice tea (for Gwen). 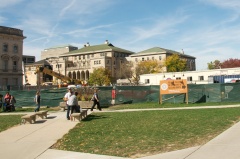 The next stop is the Memorial Union, less than a mile’s walk from the capitol building.  The walk was fun – there is a variety of shops along the way, and the Memorial Union is well worth seeing.  The back side sits on the shores of Lake Mendota, with lots of tables and chairs to take advantage of the view.  The place was, as might be expected, awash with students taking advantage of the good weather to do their studying outside. 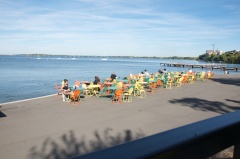 We walked through the ground floor, with its many sitting areas.  This certainly would have been an enticement to go to this school, especially on a day like today!  Next door is this incredible red castle of a building, which advertises itself as a gymnasium.  It is an imposing structure with a front that is probably sixty foot tall, stylized windows, large circular features, and plenty of bricks. 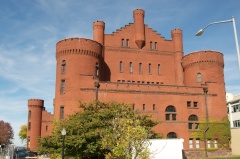 After stopping at “Scoops” for ice cream (yeah, this trip is definitely all about the food), we picked up the car and headed to the Arboretum.   This is a surprisingly large land area not too far from the downtown campus.  It consists of land which had been purchased during the depression of the 1920s and 30s.  At that time, it was cultivated pastures and prairies.  With careful planning and with the help of the Civilian Conservation Corps initially and countless paid and volunteer hours since, it has been turned into restored natural prairies, savannahs, wetlands and woods.  This is on-going work, but needless to say, it is well along its way.  It was fun to visit, but it was too late in the day to take full advantage of it.  I just wandered around the area near the Visitor Center. 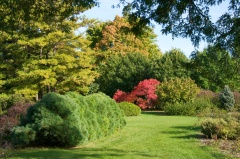 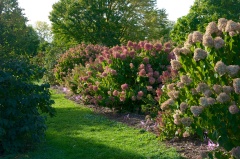 We went back to the hotel after this to pack and get set for the push home.  To break up the last ride, tomorrow we go to Munster, Ill, and see “Godspell”, and then on Friday, it is homeward bound.