Today the goal is to get to Madison, only about an hour and a half away.  Big decision: should we go to Talieson or not?  Talieson is another half an hour beyond Madison.  It is where Frank Lloyd Wright lived and worked while in Wisconsin with his second wife, and the place to visit is his workshop/home here.  In the end, we decided to forego it, but partly that was because of the other things we found to see and do.

After checking into the hotel here, we head to the Olbrich Botanical Gardens, one of the highest-rated tourist attractions in the area.  Once we get there, it is clear why.  The gardens are not huge in area.

They cover a reasonable expanse  (16 acres), however, and they are certainly large in variety of plants and settings, color, and butterflies which are enchanting, and beautiful to see.  Starkweather Creek borders one side, although the Thai Garden is on the other side of the creek from the main garden area.  In addition to the gardens themselves, there is a large conservatory (which strangely is the only part of the complex for which there is an entrance fee).  Within the gardens are the aforementioned Thai Garden with the Thai Pavilion

as its central feature, a central circular grassy expanse, and a very large convention-center-like building complex.

We spent a couple of hours wandering around in the garden areas, enjoying the color and variety. 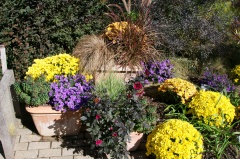 The herb garden was especially remarkable for the numerous butterflies and bees which inhabited the flowers.  I really enjoyed the rock garden, with a small stream flowing through it, and several pools formed as the water made its way along.  Alongside were a variety of juniper and pine trees, emphasizing the number of different shades of green there are.  The herb garden was nice for the ability to take pictures of butterflies especially in the purple flowers.

The Thai Pavilion was a gift to the Orbich, installed by a group of Thai workers who came over specifically to establish the work of art in place and to plant the gardens around it. 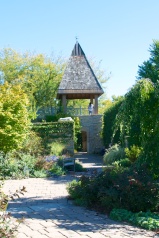 Back in the garden, one of the highlights is the tower, which gives a second-story view of the garden as a whole.

A beautiful day; a really nice way to spend it.

We ate dinner at the restaurant in the hotel, enjoying a pizza (Gwen), and a small steak with truffle-béarnaise sauce.