Travel to Agawa Canyon via the Algoma Central Railway.

Gwen’s challenge was to get us into the northern Michigan territory approximately when the trees are changing colors for fall.  She succeeded admirably.  But that is getting ahead of my story.   The focus for today’s travel was to take the a  slow train about 110 miles up into the upper Ontario province wilderness to see what could be seen.  And a lot could be seen.  The train, deliberately a tourist attraction, travels at a sedate 30-40 mph, starting at 8:00 am, getting to the Agawa Canyon valley at 12:00 for an hour and half’s stay, and then rumbles its way back to the starting point.  Once again, thanks to Gwen’s connections at Holiday Inns, we stayed in a Holiday Inn Express literally walking distance from the starting and ending point of the train journey.

without the usual train station accoutrements, such as platforms, or even an obvious track.  Sure enough there is a track, running along the north side of the parking lot, sitting between the parking lot and Bay Street, but it is a single track with a tarmac sidewalk, and unless you walked right over it, you wouldn’t even know it was there.  Come 7:30 am on this particular Sunday morning, however, it was clear the train would be long and fully loaded.  Not quite on time, but looking ready for its day, along came the train down the track to enable us to climb on board.  (Can you spot Gwen amongst the anxious travelers?)

The train is equipped for its job.  In addition to comfortable seats, it has TV monitors at a high level which serve two main purposes.  The first is to show the scenes to visualize the stories our hosts are telling us as we head up north, and the second is to show the view from the engineer’s seat as we charge forward down the track.  The engineer’s view gives us a 20-second warning of we will be seeing so we are prepared to look out the right or left as appropriate.  This is a very useful feature.  The hosts’ narration (fully pre-recorded; the on-board train people are there to do their specific jobs, not to entertain us) is well done; it nicely complements the scenery.  They talked a lot about the history of the area we were traveling through, and the railroad itself.  The local “Andrew Carnegie” who established the railroad and many of the businesses the railroad has served since the late 1800’s was a man by the name of Francis H. Clerque.  As found in Wikipedia: “Born in Brewer, Maine, Clergue studied law at the University of Maine after which he was involved in a number of business ventures until coming to Ontario, Canada. Clergue came to the city backed by Philadelphia businessmen. He saw the potential for industry with the location of the town. He helped establish a hydro-electric dam which provided the town with cheap and abundant electricity. Following the 1895 construction of a new canal and lock, he founded the paper mill St. Mary’s Paper, Algoma Steel (now called Essar Steel), as well as a portion of the Algoma Central Railway connecting the city to the transcontinental artery of Canada, for which the city is most noted. He also established the Helen and Gertude mines. He used all of his ventures collectively to build his empire. Algoma Steel was started by using pig iron from the Helen mine to make steel rails.”

Clerque was not as lucky as (perhaps not as good as) Mr. Carnegie, and ended up bankrupted by his desire to get all the businesses started too quickly.  The story (for him) ended in 1903, but as our hosts pointed out, the main businesses that today are the chief employers in Sault Ste Marie are the same ones he started back in the late 1800’s.  They emerged out of that early bankruptcy and have maintained themselves ever since.

As we continued north, the colors grew more varied and picturesque.  While the train engineer Gwen talked to once we got to Agawa Canyon believed the top of the color wheel would not be reached for another one and two weeks, certainly in areas the colors were already there.  For us this was fine, as the contrast provided by the green interspersed amongst the colors from deep red to light yellow only enhanced the views.  Following is a series of pictures taken from the train as it traveled north.  It was a difficult process figuring out how to avoid colorful blurs as the train continued its motion.  But the views were spectacular, as you can see.  There were many lakes, and almost the whole way was through forest.  Some of the lakes had houses on them, and from what they said there is a train that picks up passengers by request as it travels north or south.  The colors were at places many and varied, while at others it was more clustered (such as all yellows).  At a few places the tracks are quite high on the side of a valley, and the views go way off into the distance. 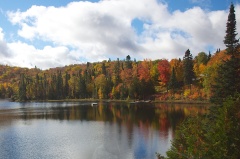 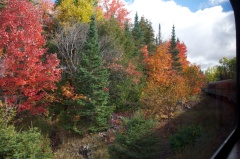 OK, there’s too many pictures for this one post.  I’ll put a few in this post, and then a few in each of the next posts until I run out.  It all fits the theme for this trip anyway, and we saw colored beauty every day, even when we didn’t manage to photograph it.

The train ambled its way through to Agawa Canyon, and we had an hour and a half there to look around and see the beauty spots.  There are three hiking trails, but with so many people, they were not lonely trails.  I took the “Lookout” trail, which they cautioned several times on board the train to think about beforehand, as it included 300 steps to traverse up and then back down again to get up to the main lookout platform.  As might be expected, the large contingent on board who were not obviously English speakers picked that trail as their first choice.  The steep climb took us first to a mid-way platform, and then up to a platform that was close to the top, and finally the highest platform.  Indeed the views were quite spectacular. 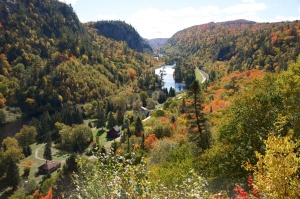 The Agawa River runs to the left.  In the lower left corner, you can see how brown it is.  The tannin from the trees colors the water to a great extent.  It looks like it should have a distinct alcoholic taste to it (just in case, I didn’t try it).  It is possible to see the train car-tops to the right of the river.

Thanks to the good weather, there were good views to see.  Gwen took off to the two other sites, the Bridal Veil Falls,

After climbing down from Lookout Point, I, too, went to Black Beaver Falls.  We then met up back in the train car.  The train crew had been busy while we were gone – taking the two engines from the front of the train, and moving them to the new “front” for the trip back, and rotating the seats in all the cars so indeed going back we would be still be facing forwards.  We traded with the pair across from us to we could get the view from the other side of the train.  As soon as the train got underway, Gwen and I headed to the dining car to get some lunch.  We returned, and enjoyed the view from the left side of the train all the way back.  On this side, there were many more lakes and rivers to be seen, or at least that was what it seemed.

The trip back seemed longer than the trip out, but it was, if anything, somewhat shorter in time.  We had left at 8:00 am, and returned about 5:45 pm.  Getting dinner proved to be more of a problem than it should have been – the restaurant within walking distance from the hotel had a 45-minute wait (we think a bus load arrived just before us), so we ended up at a Subway, not one of Gwen’s favorites.

Tomorrow — on to the Shipwreck Museum, Tahquamenon Falls and our visit with the Kerr’s.