Today, we go to Munising and Christmas to stay with Hank and Beth (Kerr) at Hank’s brother’s cabin on Lake Superior.  Breakfast downstairs was a lot calmer than it had been the previous day (no train travelers to compete with as we did yesterday – they had already departed by the time we got down there).  We left, heading south first to get back to the UP across the US-Canadian bridge, and then to the west first to the Shipwreck Museum at Whitefish Point, and then to Tahquamenon Falls, and finally to Christmas, MI.

The Shipwreck Museum, located at Whitefish Point, is certainly one of the high points of the trip so far.  It comprises five buildings, all painted a bright white, arranged in a loose circle.  The first to visit is the Shipwreck Museum proper, with exhibits describing many of the more significant shipwrecks on Lake Superior.  In the center front as you walk in is the bell of the SS Edmund Fitzgerald.  Around the room are areas one after another each focused on a particular tragedy.  Each contains a brief story of that shipwreck, including descriptions of the ships involved (and there seemed to usually be more than one), and what is known of their crews and cargos.  On one side of the back wall is a back-lit screen that shows Whitefish Bay, slowly adding one circle at a time each labeled with the ship’s name and date when it went down there.   There have been over 1000 shipwrecks on Lake Superior from the early 1800’s to the present day, and Whitefish Bay, due to its peculiar geography, is the location of more than its share.

The wreck of the Edmund Fitzgerald is the only one I specifically knew about beforehand, as it was the subject of a song written and sung by Gordon Lightfoot, one of my favorites in years past.  I was not aware of much of the detail, however.  This was the largest freighter on the Lakes, launched in June of 1958.  It handled iron ore, setting records for the quantity it would move from the mines in Minnesota to smelting plants in Detroit, Toledo, and elsewhere.

The pictures in this panel show the EF moving into the Soo Locks on one of its many trips.

On the night of November 10th 1975, a storm caught her and a sister ship, the SS Arthur M. Anderson about 17 miles out from Whitefish Point.  Hurricane-force winds, rain and waves up to 35 feet high lashed the ships.  The Edmund Fitzgerald had a full load sailing not too far from Whitefish Point.  The two ships were in communication, and it seems the EF was having trouble – it was taking water on board at a rate only barely compensated for by its bilge pumps, and experiencing a list to port.  The storm had made its radar system inoperable, but the Captain in his last communication to the Anderson said they were going to make it.  Two larger-than-usual waves hit the Anderson, and after she righted herself, the Edmund Fitzgerald had disappeared; there were no lights from it to be seen anywhere, and it was lost from the radar screen.  After some searching, it was believed she went down, although no crew members nor debris was found.  After much more searching, she was found, sunk with her entire crew of 29 sailors, 17 miles off Whitefish Point.  Much speculation (and much writing) has been done concerning the cause of the wreck, but no definitive explanation has emerged.  Many changes have been made to the maritime rules for ships on the Lakes, however, and the results have been an increase in safety for the crews and a decrease in the accident rate.

In the second building, there’s a movie about the raising of the EF’s bell.  The bell was cleaned up and sits in pride-of-place in the museum building as a memorial to the crewmen and to those who have lost their lives in shipwrecks on the Lakes.  After raising the original bell, it was replaced on the sunken ship by one of similar size inscribed with the names of the crew members, and those who survived them.  The building where this movie was shown also had posters showing some of the more popular wrecks for diving, including information on how they came to their undoing.

The third building is the museum for the US Life Saving Service.  This service was founded in the mid-1800’s as a volunteer enterprise, funded only at the level necessary to pay for the tools of the trade: surfboats,

torpedo guns (to fling rope-attached missiles across the bows of boats in distress), life saving rings, axes, and such at stations along the Atlantic seaboard.  In 1871, Congress authorized funds to pay for personnel to man and maintain the stations.  It also extended the locations for such stations, and the next year stations were established on the Great Lakes.   The men who worked this service were not paid very much, but were nonetheless dedicated to their purpose of rescuing people who had been shipwrecked nearby.  I enjoyed the story of one captain who got the call from a nearby town’s mayor concerning a ship in distress just off their shore.   The only way to get there in any reasonable period of time was to board a train with his crew, tools and the surfboat.  They indeed were able to rescue the ship’s crew before it went down.  This service eventually became part of the Coast Guard.

Next around the central green was the home of the Whitefish Point Lighthouse keeper.  This home is spacious, containing four bedrooms, living room, kitchen, two parlors, bathroom facilities, and a third floor we weren’t given access to.  It was just as well that the house was large, as the lighthouse keeper and his family were more or less on their own for most of the year.  The exhibits were based on the keeper who manned the lighthouse in the first 30 years of the 20th century, a Robert Carlson and his wife.  They raised a grandson and granddaughter there.  The isolation of the lighthouse keeper’s job made for close-knit families.  The granddaughter wrote a book of her experiences, which informed the reconstructions in the house.  The lighthouse itself is just outside the house.  Beyond the lighthouse, there is a decked path to the beach, and the opportunity to see shipping on the horizon (yes, there is one there!).

There is another building there, but it was not open to the public.  All and all, it was a very informative museum.

From there, we drove on to Tahquamenon Falls, said to be second only to Niagara Falls in the US in volume of water per minute flowing over it.  It has two separate falls named, not too imaginatively, the upper falls and the lower falls, and we saw them both.  The upper falls is the more dramatic, in that it is a higher drop, but the lower is more varied in how the water gets down with an island in the middle.

The upper falls is wide like the Niagara, but neither so high nor so wide. 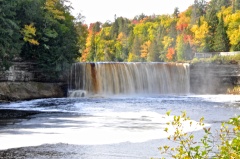 It is certainly large enough to create a deep pond at its bottom, and a wide river downstream.  Like all the water we have seen so far, the water here was brown with tannin.  As can be seen in the picture, it was very brown in one area on the left hand side, perhaps from a downed tree the water flows over at that point.    There are a number of viewing platforms, and each gives a different perspective of the falls.

From there we went to the lower falls.

Here the water flows around an island, with small falls on either side.  On the left hand side, the water flows across rocky flats creating a rapids effect.  Beth said that when they were younger it was allowed to walk to the island over the falls, but now safety considerations means that is no longer allowed.

From here, we proceeded on to Christmas, MI, and Hank’s brother’s cabin.

Here are a few more pictures of the scenery from the Agawa Canyon train trip. 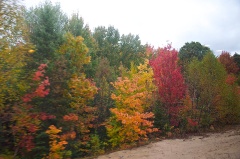