Today, another travel day, was spent driving from Dallas to Bentonville, Arkansas, the home of the Crystal Bridges Museum (founded by the daughter of Sam Walton, of Walmart fame and fortune). 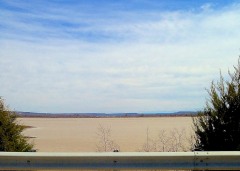 A lake in Oklahoma

Traveling out of Dallas was a long process; mainly because the city itself is so large, and the speeds limited to 60 and 65.  It was raining when we started as well, so visibility was not the greatest.  The terrain is flat (or rolling hills at best).  After we got out of the city, the hills were a bit more visible.  Our route took us through Oklahoma, and we happily sang along to the songs of the musical as we drove through the state.  The way we came into Oklahoma was such that we only know we had crossed the state line then the cars started to have more Oklahoma license plates.  Only Arkansas greeted us with a great “Welcome Center” both coming and going from the state.  Missouri did not provide us with a “welcome” either!

The only thing about Oklahoma we noticed was the color of the lakes we passed.  Instead of a blue, or a bluish gray color, the lakes were brown.  Like they were such a mixture of water and sand that the sand did not have the possibility of sinking to the bottom.  Strange!

The front entrance. Note the silver tree at right. 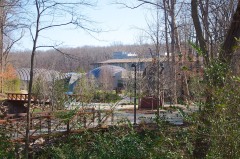 The back entrance. The creek ends in a pond between buildings.

Our visit to the Crystal Bridges Museum started by a quiet trip from our hotel across the freeway to the town of Bentonville itself.  This town is clearly benefiting from and enjoying the largess of the Walton family.  We passed a very nicely appointed park with numbers of tennis courts and a field with numerous soccer nets set out for practice use.  The Museum is located in a wooded area off the beaten path, and we proceeded through the trail as marked by the signs until we found the parking lot.  It doesn’t open until 11:00, but we had little to do, so we showed up about an hour early with the intention of walking some of the trails through the woods.  A couple of school buses turned in ahead of us, and so clearly the Museum opens earlier for school groups – a great idea.  We walked from the parking area along a broad concrete sidewalk path through the woods to what appeared to be office buildings with a parking lot of its own (clearly the employees get there before 11!) and walked down along a service road with the idea of finding what we could.  We came down to an art walk, with statues of interest along a path that led to the back entrance of the museum.

The statues along the path, bronze in color, are really quite fascinating.  They are of animals, with striking features.  The end of the path (onto a street) is highlighted with a tortoise and across the street, a hare, much larger than life, but looking like they are enjoying the race.

Further along there is a bear by a stream, catching a fish.  He appears to be life size, and doing what I’ve seen pictures of bears doing, but in a playful attitude.  The most interesting of these is the last one – a pig with the most beatific smile on its face.

As we approached the back entrance to the museum, the next statue we come upon is positioned on a pedestal, a cowboy on a bucking horse with his pistol out shooting into the air.  The material it is made out of is shiny – glassy, even – with subtle colors underneath that shine through when the sun hits them. 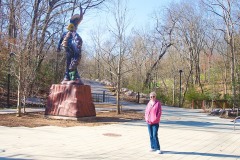 With the sunlight on it, it had rich greens, blues and browns, while without the sun, it almost disappeared into the surrounding wood.  Very well done!  We walked along a different path from the bottom entrance to the museum and arrived at the top entrance just as they were letting people in (early) to go through the process of getting ticketed and getting our museum tour iPhones.  The tour we wanted to go on most was the visiting Rockwell exhibition, so that was where we went first.

Sure enough, the school tour groups were ushered out of the Rockwell exhibit just at 11:00, and once they had retreated, we were given the opportunity to step in and take our time going through it.  There were quite a number of Rockwell’s paintings on display, and then in another part, we were treated to the opportunity to see all 323 Post Magazine covers.  The main thing that draws me to Rockwell is the detail and the story I find in his paintings and in his covers.  To be able to think up the story, and then to find and paint the images that clearly express that story, that is Rockwell’s gift.  To be able to illustrate it in such detail just makes it so much easier for the viewer to understand the story.  An iconic example: the picture is three boys (about 12 – 13 years old) and their dog running to the left, in front of a sign which says “No Swimming”.  They are carrying or partially wearing their clothes, their hair is wet, and their feet are bare.  Obviously they are trying to avoid being caught by the authorities for swimming in the pond where they shouldn’t have been.  I get a real chuckle out of this picture every time I look at it.  Compare it to a much later picture Rockwell did with a young black girl in a white dress with school books in her arm walking along in the center of a square created by four much larger men (heads not in the picture), with yellow armbands on their left upper arms saying “Deputy US Marshall”. This second one does not evoke a chuckle, rather it is a grim reminder of the desegregation trials and tribulations of the 1970s.  But each has a clear story to tell, and the details in the pictures help make their respective messages clear.  The exhibit was fun to go through.

I always enjoy the opportunity to see Rockwell’s work, and this was no exception.  I like to work out the story, and to make the details fit.  In this case, with all the Post covers in one place, it was really easy to see similarities and differences through the years.  Similarities included the use of the same models for the pictures.  They, of course, were not the same for all the years, but in nearby years the models were similar.  His whimsy is always present, as is his clever choice of pictures to illustrate the concepts.  Differences – he grows more mature in his themes as current events begin to encroach on his illustrations.  The example above shows that as well.  Swimming where it is forbidden is a whole lot different than shifting the perspective of a whole world of people.  Perhaps the best remembered of his pictures, though are the paintings he did to illustrate Roosevelt’s four freedoms during WWII.

The rest of our time was spent going through the permanent collection at the museum.  It is a fascinating collection.  It is primarily American art – starting with the earliest painting of Indian life created from a set of graphics done by a person who came to the colonies.  There were people who painted the families that had the money to have it done in the 1700s, and some of their work was on display.  Some remarkably done paintings from the 1800s – landscapes, and scenes from the western part of the US.  Pictures that are full length in height of women of the late 1800s, early 1900s were there.  The curators have found some remarkable work, including some sculptures that are amazing.  As the work passes on into the 20th century, it gets into abstraction, including an Andy Warhol.   We didn’t spend too much time on this part, but it allows us something to look forward to for next time.