Today is Santa Fe day.  We visited the Museum of International Folk Art (on Museum Hill), saw the oldest Church in the continental US, and walked around the central town square area, where we got our lunch.

The Museum of International Folk Art is different from what I usually expect in a museum.  They have picked a few themes, and have dedicated a wing to each.  Today, they have a wing devoted to HIV/AIDS education (with a lot of expected participation aspects), a wing with exhibits concerning the culinary aspects of living in NM through the years, especially ideas, equipment, furniture and utensils related to cooking, chocolate, and a drink popular in South America called Yerbe Mate and two wings which is focused on international folk art.

The HIV/AIDS exhibit was OK, but didn’t excite me much.  There is a lot to learn here, but an exhibit focused on drawing attention to the issue is not something I need to spend time on.  The culinary exhibit, on the other hand, really got my interest.  Basically, the aspect that caught my attention relates to the history of the culinary dishes, and how this has changed with major events in the world’s history.  A point they make right in the beginning is that many of the products we take for granted now were sourced in the Americas, many were sourced in Europe, and many in Asia, Africa, and the Near East.  This eventually was (at least partially) the impetus for much of the world trade in foodstuffs even right up to today.  We know about the obvious ones – tobacco from the Americas went to Europe as a result of the discovery of the Americas by Columbus, along with tubers like potatoes, squash, and others, avocados, corn, and so on.  Europe provided beef, and other resources to the Americas, while Asia was the traditional source of spices.  Chiles came from the Americas, as did chocolate.   Tea came from China originally; coffee is from the Near East.  In the centuries after Columbus, a brisk trade developed from Europe to Central America to Asia, and back, moving lots of these commodities back and forth.  It also opened opportunities for the development of new types of foodstuffs, combining these items into dishes that brought out the best from each ingredient. 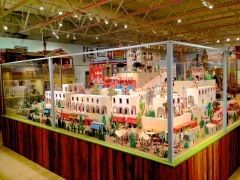 One of several model villages 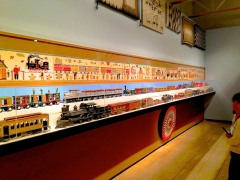 The international folk art wing contained two exhibits we saw.  First was a variety of quilts by Amish societies around the US, made from the early 1800s to modern day.  These quilts were based on patterns established by the families, and in most cases were geometric in basis.  (Tessellations come to mind in thinking about them now.)  They represent a great deal of work, and in most cases exceeding skill in making them.  They come in sizes from doll-crib to adult bed size.  The other exhibit takes up an entire gallery, and is named for the major donor, Alexander and Susan Gerard.  They started out collecting folk art in the 1930s, and when they came to Santa Fe, they became very interested in the museum, donating much of their extensive collection to the museum in the early 1970s.  At that point, their contributions effectively quadrupled the size of the museum’s collection.  Alexander Gerard, who was an interior and textile designer of considerable repute, had grown up in Italy with an Italian father and American mother, educated in architecture in Rome, and practiced in Florence and New York before coming to Santa Fe.  The exhibit, set up by Mr. Gerard himself in the 1980s shows off more than 10,000 of the items, but the total collection consists of over 100,000 items.  Some of the highlights: US flags of various sizes, with various ways of depicting the stars in their area of the flag against the strips; a collection of model transportation items (cars, buses, trains, carts, etc.); Polish Christmas scenes with multistory toy castles with shiny aluminum fronts used as stages around Christmas time to enable the playing of various Christmas-like stories; street scenes of various originations showing markets and people milling in those markets; stitchery practice, where youngsters would stitch alphabets in a variety of calligraphic patterns (fonts); river front scenes made up of a variety of dolls, boats, and buildings set on wooden blocks serving as elevation delimiters; and a fascinating sectioned-off area where many religious (Christian) folk art were shown.  Fascinating stuff.  Lessons from this exhibition – folk art is not art in its most perfect form, but art indicative of individual skills at trying to convey a message, or create something functional.  There’s hope for my painting yet!  Another lesson: exhibits with lots of words rather than being organized to bring their message across visually are apt to be lost in the words.  It was a fun exhibit, with lots to learn, and lots to see.  Another aspect: you don’t have to like all of folk art to like some of it.  You don’t have to like folk art to acknowledge its value in telling a story or capturing history.

From the International Folk Art Museum, we went to the downtown (old town) area of Santa Fe.  Our first visit there was to the oldest church in the US. a Spanish colonial mission church built between approximately 1610 and 1626.  Though the church has been repaired and rebuilt numerous times over the years, its original adobe walls are still largely intact despite having been hidden by later additions.  At the front of the chapel is a plexiglass-covered cut-out in the floor enabling the viewer to see the original 1610 foundation, as well as footings for an Indian dwelling that has been dated to 1300.  A bell looking to be half the size of the Liberty Bell sits in the back of the church for people to ring as desired.

Right next to the chapel is a building claimed to be the oldest residential building in the US, built around the same time as the chapel.  Unfortunately the docent was not there, so we didn’t get to see inside.  We walked down the road from there, and happened upon another building related to the Catholic religion — the Loretto Chapel.  This one, built between 1873 and 1878, was originally home to an order of nuns.  The item of interest in this chapel is the circular stairway built to enable the sisters to gain access to the choir loft at the rear of the chapel.  The stairway confounds architects, engineers and master craftsmen to this day.  It makes over two complete 360-degree turns, stands 20’ tall and has no center support.  It rests solely on its base and against the choir loft. The risers of the 33 steps are all of the same height.  Made of an apparently extinct wood species, it was constructed with only square wooden pegs without glue or nails.

My understanding of the story is that after the chapel was built, the sisters realized that the ladder to get to the balcony was inconvenient and hazardous.  Just as the nuns were looking for help with this project, a young carpenter showed up looking for work.  The circular staircase was completed in about six months time, in any case, before 1883.  The young carpenter then packed his tools and left, collecting money neither for his time nor for the cost of the wood.  The banisters were added in 1887, although the carpenter this time was paid for his skillful work.  The chapel was eventually determined to be redundant to the needs of the nuns, and eventually was sold into private hands (in 1971).   It is still used for weddings and other appropriate occasions.

After an interesting lunch in a French café (featuring crepes) in the old-town area, we walked to the Cathedral Basilica of St Francis, consecrated in 1886.  This is a much larger structure than the others, and is still a going concern.  It was designated a Basilica in 2005 by Pope Benedict XVI for its role as the “cradle of Catholicism” in the Southwest US.

A short walk from there took us back to our hotel.  This place is a boutique hotel (the Inn on Alameda) right in the heart of Santa Fe, and was a great find on Gwen’s part.  It served wine daily at 4:00, along with veggies and dip, and thus enabled us to eat our big meal at breakfast and lunch and to just gobble their free-by’s at dinnertime.  Their breakfasts were quite good, and included, in addition to the usual fare, quiches and other more exotic egg dishes.  It was sad to only spend two days there, but we’ll be back, I suspect!