Mt Humphreys as seen from our hotel room.

Today was our day in Flagstaff, AZ.  We first drove around the old-town downtown area, which looked appealing; although it appeared to be somewhat without people early on a Monday morning.  We then headed to Lowell Observatory.  Flagstaff is set in the mountains, and the dominant feature is Mt Humphreys, the highest peak in Arizona.  Our view was of a snow-covered peak, which for Gwen is great — that’s as close to snow as she usually wants to get.

Lowell Observatory was surprising to me, even though I had heard the name before.  I had not remembered anything special about it.  It turns out that this is one of the earlier observatories, put together by Percival Lowell in the late 1800s in the hills above Flagstaff.  He was very interested in whether or not life existed on Mars, so he had the observatory  built housing a 20 foot long tube about 2 feet in diameter, and commenced to make observations.

He kept his records by hand, drawing what he saw of Mars in a notebook.  Later on, the technicians who maintained the place assembled a camera for him which he could attach in place of the eyepiece, and expose glass plates about 8″ by 12″.  The building’s dome is not hemispheric, rather it is close to hemispheric, created by a number of flat faces assembled together.  The support structure would not have been able to bear the weight of a full hemispheric done, we were told.  The end result has virtually the same room as a dome.  There is a set of doors to the outside sky which are operated by a set of ropes and pulleys. The whole structure is resting on a set of what appear to be small automobile tires.   Three motors easily rotate the dome within a circular track to whatever sky angle is desired.  Lowell sat on the ground level, stood, or sat on a chair resting on a horizontal platform between two stairways, which enabled him to see what he wanted through the eyepiece.  The telescope is a refractor, and was installed at the observatory in 1896.

The land where the observatory is located is still in use for astronomical purposes.   Several other telescopes of various types are now established on the site.  Among other things, it was here that the images which enabled Clyde Tombaugh to point out the (now classified “dwarf planet”) Pluto were taken in 1930.  The building holding this photographic telescope is about 100 yards from Lowell’s original observatory in its own building.

You’ll notice the flat plate at the bottom of the telescope.  This is where the photographic plates were set to expose them by Tombaugh.

There are 20 or more post-docs doing research out of Lowell at any one time, on a variety of subjects.   For example, there is a study going on now concerning stars very similar to our sun with the object of finding them in different ages to see what we can learn about the details of our sun’s future (and past) existence.  Another study concerns the brightness of the reflection of the sun off of the outer planets.  Several of these projects have involved building telescopes of their own, and these days they are getting smaller in scale as the telescopes get more technically sophisticated, and their controls require less and less immediate hands-on monitoring. 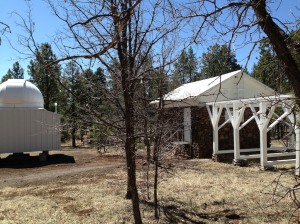 The telescope on the right uncovers itself by shifting the roof from the building to the framework on the right, leaving the entire night sky available for the viewers.  The telescope on the left looks like the original Lowell telescope building, but much smaller, and in fact that is what it is.  We were told the scope opens itself up, and obtains images through the night, available for the review by the astronomer on his computer the next morning.

Lowell has teamed with the Discovery Channel to build a new telescope about 25 miles south of Flagstaff called (not too surprisingly) the Discover Channel telescope, which will (when completed) be the fifth largest such telescope in the contiguous US.  We really enjoyed the pine forest setting of the observatory grounds.  On the site, in addition to the several observatories, is the house Lowell lived in (a museum for the site now), and the purpose-built building for the store, display room, theater and restrooms.

After Lowell Observatory, we went out to lunch, and then on to Walnut Canyon,  a National Park now because it is where the ancestors of Hopi Indians made their home in caves in the convoluted vertical walls of the canyon itself back in the 1100’s.   The park’s main feature is a walk (paved for the most part, with over 260 steps) that enable the visitor to walk down into the valley and around the main ‘island” in the middle of the canyon.  The walk takes you alongside a few of the caves where these indians lived. 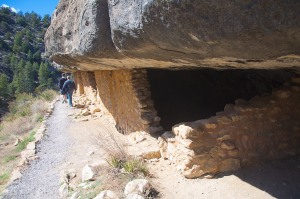 Note the black smoke on the ceiling.  The walk also gives you a great view across the valley from a number of others. 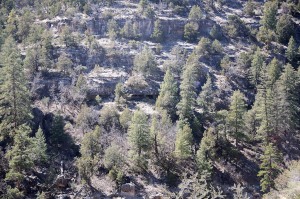 but you have to look closely to see some of them.

The canyon is twenty miles long, 400 feet deep and ¼-mile wide, and according to the signs, anywhere from 50 to 400 people lived in the caves at their height.  They farmed the flat land at the top of the valley.  The valley verticals provided much in the way of passive defense that was prevalent amongst early cultures (houses on stilts and so on).  The path was a bit of a challenge, mainly due to the altitude, but down and back was less than an hour.  The canyon itself is breathtaking to view, and spectacular to walk!